The Miracle Stone in Karur

Lalapet village in Karur district of Tamil Nadu is well known for Sri Jaya Anjaneya temple. Situated close to river Cauvery, it is surrounded by paddy fields and banana and coconut trees. This temple is actually 300 years old temple!

Well, with all the scientific temperament in place, when you do come across something like this, you do believe in miracles! The miracle stone in this temple reiterates the fact that the Lord is present to bless his devotees. The stone is flat and oval and is believed to have been dropped by Sri Anjaneya while carrying the 'marunthu malai' to Sri Lanka.

Devotees bathe early in the morning with water drawn from the temple well. Wearing the damp clothes after bath, the devotee has to climb up on the miracle stone. He has to pray to Lord Sri Anjaneya Swami and request the Lord to fulfill his wish, keeping both hands on either side of the stone. Now wait for the miracle! The stone starts rotating! If it rotates towards the right, your wish will be fulfilled. In case your desire is unjustified, the stone will not move at all.

When the stone rotates, you also have to rotate with it but without taking out your hand from the ground. Days such as Thursday, Saturday, Sunday morning and Ekadashi (11th day after New Moon or Full moon) are auspicious days to pray on this miracle stone.


How Was Sri Jaya Anjaneya Temple in Karur Built

This famous Lalapet temple was built when people decided to relocate temple of Sri Varadharaja perumal in this village to another village called as Kallawpallee. The entire temple was shifted but its 'dwajastamba' made of granite stone refused to budge! When people started digging, a red coloured liquid poured out. One of the village elders received divine direction for construction of the temple close to the 'dwajastamba'. The 'sannathi' was built for Sri Anjaneya swami. The villagers chose to construct a temple close to this with Sri Anjaneya Swami's statue facing towards the south. 'Maha kumbabishakam' was first performed here in the year 1940 and later in 1984. 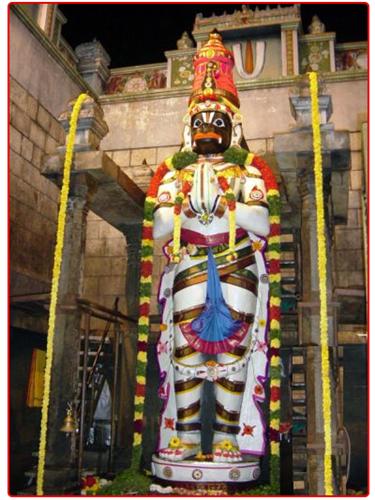 There are Anjaneya temples in Kanyakumari, Namakkal, Tiruvallur, Thanjavur, Dindigul, Coimbatore and Sholingar.In Chennai, Anjaneya temples are in localities like Nanganallur, Ashok nagar, Mylapore and Alwarpet.

Anjaneya was the child of Vanara maiden and Vayu. Anjaneya is Lord Hanuman who was granted the boon from Brahma that 'he would have all the wisdom'. Brahma also granted to Anjaneya or Hanuman that he would be an eternal being or Chiranjeevi because of his wisdom.


Other Famous Temples near Karur

There are some very well known temples near Karur which include Kalyana Venkattaramasami temple at Thanthoni (5 kms. from Karur), Pasupathieswarer Temple and Sri Mariamman Temple. Karur is one of the seven sacred sthalams of Sivalayams also. Another temple in Pugalur famous for its sculpture is situated towards north-west of Karur is dedicated to Lord Subramania and is located on a small hill at Velayuthanpalayam near Cauvery.

It is the belief of discovering something special that makes tourists reach out to remote destinations all around the globe. Sri Jaya Anjaneya temple in Karur is no exception and yes! it is about wishes coming true!

Comments / Discussion Board - The Miracle Stone in Karur